Home Who We Are FCUMC Staff Church Organist 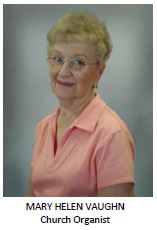 Mary Helen has been with Fern Creek UMC since 2008.  She loves hymns and organized choirs and loves to worship in the traditional setting.  Her favorite thing about her role at FCUMC is that she is able to play both the organ and the piano for preludes and special music.

Mary Helen retired from JCPS (1997) after 30 years of teaching vocal music.  She taught all grades at one time or another from kindergarten to 12th grade.  She was also a middle school counselor for three years.  She grew up in Virginia Avenue Methodist Church until moving to Audubon Park Methodist when she was a teenager. During college, she sang in the choir at 4th Avenue Methodist and this is where she began playing the organ.  She became the assistant to the regular organist and continued to sing in the choir.  Mary Helen married her husband, Robert, at 4th Avenue in 1966 and their three children were all christened there.

In her personal time she loves Broadway musicals, classical music, ice cream and Mexican food. She loves accompanying “The Master’s Men,” an  all volunteer choral group of which she is a charter member which began in 1980 with 12 men; their membership now is approximately 110 (their original director and accompanist, both women).  She is personally passionate about playing the piano and accompanying “The Master’s Men” and traveling–especially going on cruises.  At home, she loves spending time with her children and grandchildren, playing games and eating out.  She also loves the American Red Cross as they are the first organization to show up when people experience a disaster.

Mary Helen’s gift is her ministry.  She says that “a long time ago (while at camp in junior high school) I promised God I would use my talents to worship him.  I hope to continue playing the organ for services and accompanying the Master’s Men until my fingers won’t move anymore.” We are truly blessed to have her share her talents with us and all those who worship with us.

If you were to ask Mary Helen what she likes about FCUMC, she would tell you that our church is friendly, giving-oriented, has on-going missionary work, is welcoming, and there is something offered for everyone.